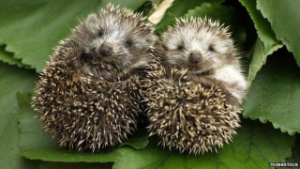 One cold winter, the climate became chilly. Animals and plants started dying.
A group of hedgehogs decided to migrate together as a team. They kept each other warm, but there was one tiny(not so tiny)problem. Their quills used to prick each other and wound them. They decided that from now on, they would walk at a distance. But this idea led to a greater problem. Now they could not keep each other warm so slowly and slowly, they started dying one by one all alone in the cold.
Now the remaining hedgehogs had to decide that whether they want to get pricked by quills or to get vanished from the earth. They decided to stay together and soon were out of the cold country.
manav