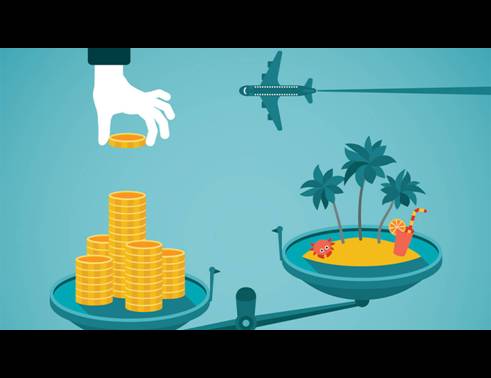 “At sunrise tomorrow the world will come to an end… You have 16 hours to live!” the priest had claimed.

This was a long ago when there was no internet or smartphones and the only mode of transport was a horse-cart.

Mr. Saver was a rich man. He owned a huge expanse of farms – Thousands of farmers worked on his fields. He had a small and wonderful family, of five lovely people – his wife, two daughters, and a son.

But there was a problem. His wife and he had a difference of opinion about the matters of their wealth.

His wife felt blessed that God had given them so much and she liked to spend it on fulfilling her children’s desires and also for entertaining their farm-workers with food, drinks, and other goodies. She believed life was ‘here-and-now’ and there was no point worrying about the future.

“Easy for you to say,” Mr. Saver always disagreed. He was of the view that he had created his wealth by his habits of saving, so she must not splurge on things that are not essential. “We will need that money to fund our needs in the future when we are not able to work. “

“But isn’t having fun essential part of living life?” she tried driving her point. But he never agreed to that view.

Then, the priest made the prediction and gave them a 16-hour warning before the doom.

In a flash, he realized how he never enjoyed his life as he was always busy thinking of the future. He looked at the scared faces of his wife and children and was filled with guilt. So he announced, “In the next 16 hours, we all will live the life that we always wanted. We will have all the fun and spend everything we have!”

He also went ahead and opened the doors of his warehouse for the farm-workers.

His wife protested, “Is it wise to spend everything in a day?”

Mr. Saver exploded in frustration, “What do you mean? All our life you nagged me to spend our money on indulgences and now when the doomsday is at our door, you are asking me this question, why?”

He disregarded her and continued with his plans for celebrations.

Then the sun rose.

Yes, it did. And nothing happened.

Everyone questioned the priest but he was in a state of shock himself. “Perhaps my charts were inaccurate, or I read them wrong.” He said apologetically.

Everyone threw a furious feat. Except Mrs. Saver — she had a certain calm on her face. She looked at her husband who had collapsed on the couch in disbelief.

She went on to gently press his shoulder to comfort him.

“Then how could you ask me to not spend everything when it was clear we were heading for a doom? You certainly knew that this was a hoax.”

The wife smiled, “I didn’t know it was a hoax. But I know one thing.”

Mr. Saver did not argue this time. He looked at her, smiled and nodded in agreement.

Mrs. Saver smiled back and asked everyone to get back to work. And she got busy in the kitchen – cooking one simple meal that everyone would relish after a night of excessive partying.