Secret of a lottery winner 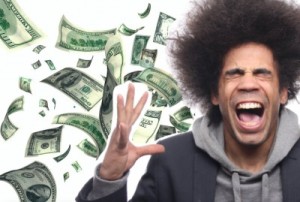 Jack was a young boy with a decent job. One day he heard that his neighbour had won a lottery. For a ticket of $1, the neighbour had received a reward of $1000. For some reason, Jack was excited to hear the news.

Jack worked in an oil factory as a packaging supervisor. The pay was good but he hated his job. He always felt it was too much work. He had always been looking for a way to earn more money. When he heard of the neighbour winning the lottery, he knew he had found that way.

From very next day, Jack started buying lottery tickets. And he bought not one, but five tickets everyday. He had no family, so he could afford to put in a good part of his wages in lottery. But a week went by and Jack won nothing.

Meanwhile the neighbour won another 500 bucks.

Jack did not give up. He decided to raise his chances by buying ten tickets a day. He knew all he needed was one stroke of luck and he could say goodbye to his job. But that stroke did not come. A month went by without a reward of a single dollar.

Jack was miffed with himself when he heard that his neighbour had made $3400 during the month. But it gave him hope too. For next few months, Jack kept investing all his wages on lottery. He also borrowed from friends. But he did not win.

Meanwhile his neighbour kept enjoying his rewards at regular intervals.

And then came a day when Jack was neck deep in debt. His house was gone, he lost his job and he also lost all his friends. He was a broke, lonely man and without any hope. And then he heard that his neighbour had won a jackpot.

Jack wondered, “Why was God showering all the luck on my neighbour while I am ruined buying the same lottery tickets? Why is life so cruel with me?”

He had no answer. And he had no hope.

Jack decided to kill himself. He stood at the top of a cliff when his neighbour saw him. And before Jack could jump, the man pulled him away from the edge.

“Let me die,” screamed Jack. “I have nothing to live for?”

“Because God has given you all the luck and nothing to me,” lamented Jack and told him his entire tragic tale. The man smiled and said, “But why do you need to kill yourself? You come home with me. I will give you some share of my luck.”

Jack couldn’t believe his ears. He went to the man’s house. The man offered him some water and then led him into a room. The room was full of papers, charts, figures and number tables.

The man told Jack, “This is where my luck comes from. I work here.”
Jack was puzzled, “What do you mean you work?”

“My friend, Lottery is not a game of chance… it is a matter of odds!” said the man.

The man continued, “Let me share my secret with you. Before I even started buying lottery tickets, I spent years studying the system. I kept my day job and burnt midnight oil to study how lottery worked. When the world slept I studied numbers. When the world partied I mastered few tricks. After putting these efforts, I have learnt just enough to pick a winning ticket once in a while. For years I made only a few bucks. But I kept working hard. Yes I did make a fortune last week. But if you put so much effort in any field of work, believe me, you will end up making a fortune.”

Jack was baffled as the man continued.